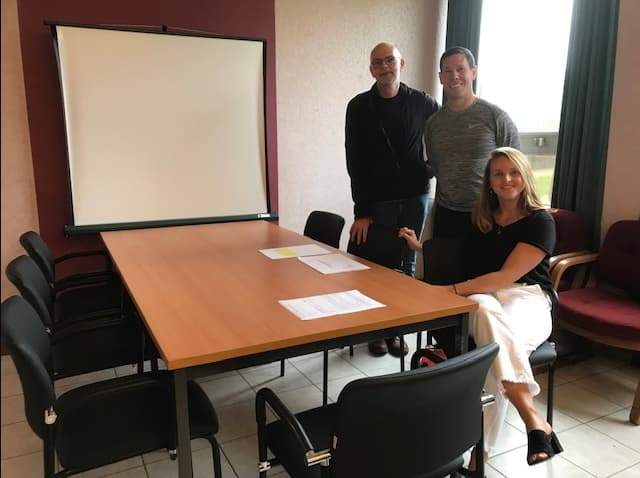 TVH, a global player in the field of components for forklift trucks, industrial vehicles, construction and agricultural machinery, donates a shipment of office furniture to the primary schools Sint-Hendrik in Petegem, Leernest in Bachte-Maria-Leerne and BuSO Egmont & Hoorn in Gavere. The donation comes as a result of the large-scale construction and renovation works at TVH's headquarters in Waregem.

The works on the headquarters started in July 2019 and are reaching the final phase. The offices themselves are also getting a facelift. Because of this extensive renovation, there is no more room for a number of pieces of furniture. That is why TVH donates its leftover office furniture to two primary schools in Deinze and a school in Gavere: Sint-Hendrik (Petegem), Leernest (Bachte-Maria-Leerne) and BuSO Egmont & Hoorn. The 38 pieces of furniture donated to the primary schools include 13 desks, a large oval table and storage cabinets. BuSo Egmont & Hoorn received 55 desks and chairs.

BuSO Egmont & Hoorn is a school for special secondary education. For some young people, however, a school trajectory that prepares them for a job on the regular labour market is not feasible, so on 1 September the school started a new project to teach this group how to live and work as independently as possible. Kris Bruwaert, headmaster of BuSO Egmont & Hoorn: "Three modular units accommodate these young people. The furniture donated by TVH was immediately put to use in a living space and in some classrooms. We are delighted with this spontaneous support: it gives our activities on behalf of vulnerable young people a little more breathing space."

Veronique Mesure, headmistress of Sint-Hendrik primary school, is also pleased with TVH's initiative. "As a school, we try to organise regular sales in order to be able to make such purchases, but due to corona, this was put on hold and there was less income than usual. Now we can equip some classes with new desks and extra storage cabinets."

Isabelle Van de Voorde, Corporate Marketing & Communication Manager at TVH, explains why the company prefers a donation to a public sale. "We wish to contribute something positive to the region. As a company, we also have a social responsibility, and this is one of the ways in which we can do something for the community."

The decision to give the office furniture a second life also fits in with the sustainability policy that is becoming increasingly important for TVH. Reducing the ecological footprint is now on top of the priority list. For example, last year TVH decided to ban plastic cups as much as possible and every employee received a cheerful reusable TVH cup. This results in an annual saving of 4 tonnes of plastic. Recently, TVH also entered into a cooperation with Ecubel for the takeover of old IT equipment. "Instead of throwing away old hardware, Ecubel ensures that the IT equipment can be reused. They recycle non-reusable materials. In this way, we are doing our bit to reduce the amount of waste electronics," Isabelle Van de Voorde explains.

Thanks to its many efforts in the field of sustainability, TVH was awarded the VOKA Charter Duurzaam Ondernemen (Charter for Corporate Sustainability) in June for the twelfth year in a row. At the end of 2020, TVH was also one of the first companies in Belgium to receive the international UNITAR certificate.